John Atkinson Grimshaw was a British landscape artist from the era of Romanticism, Symbolism, and Impressionism. Grimshaw was most known and loved for the nocturnal scenes, unlike his contemporaries.

In today’s article, let’s delve into the life of John Atkinson Grimshaw, learn about Grimshaw’s life, and also look at some of Atkinson’s masterpieces. So, if you are a fan of Atkinson’s nocturnal paintings, let’s hop on!

Painter John Atkinson Grimshaw was born in September 1836, on the eve of the Victorian era. Born in the northern industrial town of Leeds, the artist had a pretty steady upbringing. All thanks to his father’s job as a policeman and grocery store run by his mother – the artist did not see any trouble during his childhood.

Coming from a steady family, Grimshaw’s first career was pretty steady. Atkinson worked as a clerk for the Great Northern Railway and married his first cousin Frances Hubbard at 24 in 1856.

John Atkinson was highly interested in fine arts, so he left his job on the railway and pursued painting despite his parents’ disapproval.

Encouraged by his young wife and aided by the patronage of Leeds Philosophical and Literary Society, John Atkinson Grimshaw went on to become one of the most recognized painters in the world.

Painting Career and the Success

One of the most interesting facts about Atkinson artist is that his parents were never happy that their son chose to become a painter. But, looking back now, it seems that John Atkinson made the right decision to go against their parents and become an artist. He was a self-taught artist, yet he managed to develop his very own skill very quickly.

John Atkinson Grimshaw painted classic and realistic paintings rather than wasting his colors on abstract paintings, which were at their peak during the time. He also had a keen interest in creating aesthetic paintings. These paintings focused on depicting beauty over meaning and appearance over substances.

Atkinson first sold his artwork through a local bookseller, and by the early 1860s, the British artist was already exhibiting his pictures on a large scale. As his success grew, Atkinson and his wife moved to a grand mansion on the outskirts of Leeds, which also became the subject of many of his paintings. 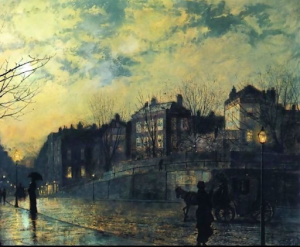 When Atkinson started painting, he was primarily influenced by prior art movements, including the Pre-Raphaelite and Aesthetic movements. Infused with influences from major art movements and his unique approach, Atkinson began creating paintings featuring unique elements.

Nocturnal scenes and beautiful Gothic-styled paintings featured a dark and mysterious atmosphere, old buildings, and barely-defined figures. These paintings made Atkinson one of the best, if not the best, painters of nocturnal landscapes.

As mentioned above, most of Atkinson’s nocturnal scene paintings featured his mansion on the outskirts of Leeds. Besides the fact that the mansion was a perfect setting for his artworks, its noble decay and faded splendor ideally suited Atkinson’s passion for atmospheric surroundings.

Grimshaw’s love for realism stemmed from a passion for photography, a hobby that would eventually become his artistic process. It is said that Atkinson made extensive use of photographic sources as a reference to craft his paintings.

Moreover, if the rumors are to be believed, it is often said that Atkinson projected the photos onto a blank canvas and used it to draw outlines of buildings and trees. However, that’s not all; some of his critics also claimed that Atkinson directly worked on photographic underlay and created paint on top. However, none of the claims were proved to be right.

Combined with different mediums, Atkinson mixed ink outlines with thin washes of paint, which were very unusual then. With oil color at the thinnest level possible, Atkinson’s brush strokes were almost impossible to detect, about which his critics often complained. But, the best part about the thin application of colors was that it would give the painting a sparkling effect that looked absolutely stunning.

The vertical canvas greatly compliments the nocturnal forestry scene, and at the same time, it also provides plenty of space for the tree branch to spread out its branch. The muted colors like blues and gray, distant fog, and the unknown path of this Atkinson painting describes the uncertainty of the couple’s love are all the features of Atkinson’s exceptional nocturnal picture.

The painting features a group of people gathered around the harbor beside a lit bonfire beneath the moon’s glow. Cityscape, nightscape, and the moonlight, three significant elements of Atkinson’s painting, are all present in this masterpiece, conveying the message of serenity and calmness. 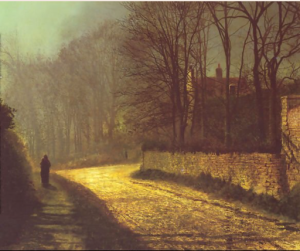 To conclude, the British maestro will always be known for his brilliance in creating nocturnal scenes. After being self-taught, the artist began experimenting with his paintings by creating paintings featuring different subjects and styles. With numerous unique paintings under his name, the master painter of nocturnal scenes passed away in 1893 due to illness.

I love you more than you ll ever know lyrics

I wish i was a baller lyrics

Skee-Lo’s “I Wish” is a popular song written by American rapper, Jermaine Dupri. The song was released on March 27,…

When you purchase something, it’s nice to know that it won’t end up as waste. Most products have a lifespan…

A thirteen run pool is a baseball game that requires no skill or knowledge and is very low-maintenance. The site…

actor elgort of the fault in our stars